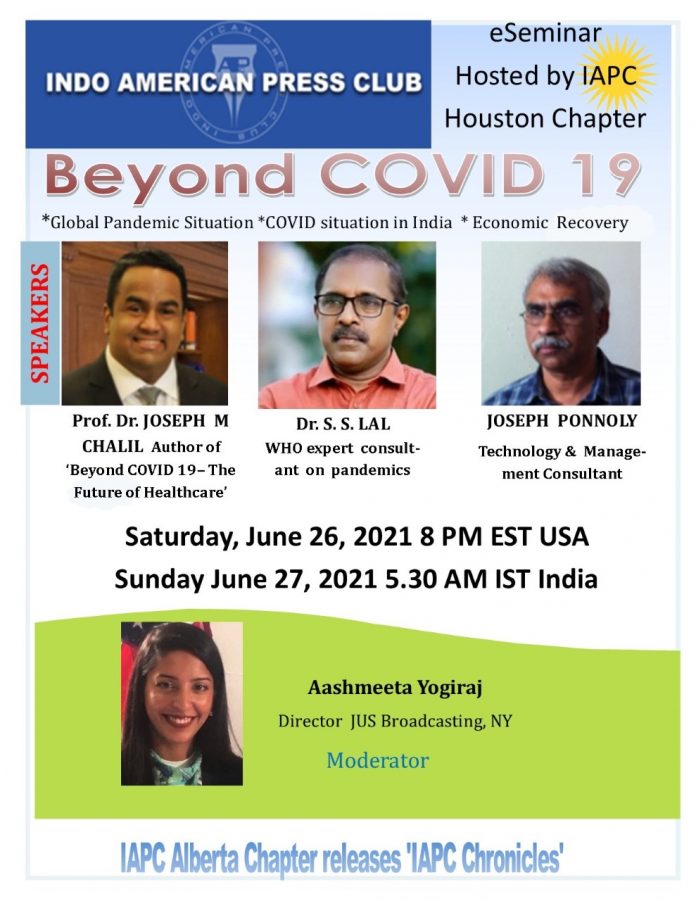 New York, July 5, 2021. Indo American Press Club, USA, held an international e-seminar on the topic  ‘Beyond COVID19: Uncertainties and Prognosis’  on June 26, 2021. The seminar covered the health crisis and the economic crisis. The panelists were  Dr. Joseph M. Chalil and Dr. S.S. Lal, two medical professionals who are internationally well-known COVID and pandemic experts, and Joseph Ponnoly, a Management Consultant.

Prof. (Dr.) Joseph M. Chalil is the Chairman of Indo-American Press Club and is the publisher of the Universal News Network. He is an Adjunct Professor and Chair of the Complex Health Systems advisory board at Nova Southeastern University’s School of Business. He recently published a Best Seller Book – “Beyond the COVID-19 Pandemic: Envisioning a Better World by Transforming the Future of Healthcare.”

Dr. S S Lal is IAPC’s National President; and he is a  world renowned  public healthcare expert and had worked earlier with WHO in Papua New Guinea, Switzerland, and USA as a pandemic expert.  He is also President of the All-India Professionals’ Congress (AIPC). He is a popular writer and TV channel panelist on health and social issues.

Dr Chalil expressed concern that COVID 19 took the lives of over 4 million people in the world, more than the combined death from the world wars. He pointed out that only 60% of the people in US have so far been vaccinated. The pandemic spread fast across the world because of air travel.  According to him, the vaccines are effective, but we are seeing breakthrough infections even for patients who have been vaccinated. Israel with around 70% vaccinations has again mandated wearing masks. We do not know what is coming.  He advocated caution.

On the situation in India, Dr. Lal mentioned that there have been more than 30 million cases and around 400,000 deaths in India. Whether the numbers have been correctly reported is an issue. The vaccination rate is around 20%.  Availability of vaccines is a major issue. 1 billion people must be vaccinated. There are logistical and cultural issues. In some places myths and superstitions prevented scientific treatment of the disease.

On how long the immunity from vaccines will last, Dr Lal mentioned that current evidence indicates that the immunity remains from six months to eight months, depending on the vaccine. Just like the flu shot, we may need booster shots as an annual routine. Along with the vaccine, we need medicines to treat the disease. If we have both, we may have protection for longer periods.

A question was asked whether there can be herd immunity without vaccination. Dr Chalil responded that without vaccination, herd immunity can be achieved if everybody gets sick. But the death rate will be higher. No one or no country can take such risk. To get herd immunity, at least 70 to 80% of the population must be vaccinated. It may take up to two years for India to achieve this. India’s spending on health care is $ 73 only per citizen as against $ 11,000 in USA.

Dr Chalil also dealt with the side effects of the vaccine.  It must be admitted that there are side effects. Most occur within the first 45 days of the administration of the vaccine. It includes increased blood clotting.  But these can be ignored since it is better than getting COVID and succumbing to it or surviving the long-term effects of COVID.  Both Dr Chalil and Dr Lal pointed out that along with vaccines, effective medicines must be developed to treat the disease and its variants.

The third panelist Joseph Ponnoly spoke about the economic crisis arising out of the COVID pandemic crisis and the economic recovery scenario in the US and globally.  He is a management and technology consultant based in Houston TX. He authored the book Gateway to the Quantum Age:  Managing Disruptive Technologies in Globalized Knowledge Economies’, published in 2018.   Earlier as a CBI officer, apart from investigating various high-profile economic crimes and frauds, he was a member of the team that investigated the biggest stock market scam in India in 1992 involving investigations against Harshad Mehta and others.

According to him, the economic recession was averted in April 2020 by the Government intervention and massive stimulation packages ($5.5 Trillion in US) that stimulated the crumbling economy. The cut in interest rate further supported the economic recovery.  Poorer sections in India were given food kits. Unless the pandemic is brought under control through massive vaccination, the economy cannot open and grow. The rising inflation, unemployment situation, and the debt crisis must be contained to prevent a possible recession in 2023 or beyond. The poorer nations would need financial assistance from the IMF and other agencies to tide over the pandemic situation and the debt crisis. There is uncertainty around the economic scenario globally since politics determines economics.